A Cyclo-RGD Peptide for the Preparation of Tumor Mimics

A Cyclo-RGD Peptide for the Preparation of Tumor Mimics

The 2D monolayer cell culture model is widely applied for drug screening. However, this approach is frequently not able to adequately mimic the in vivo response. 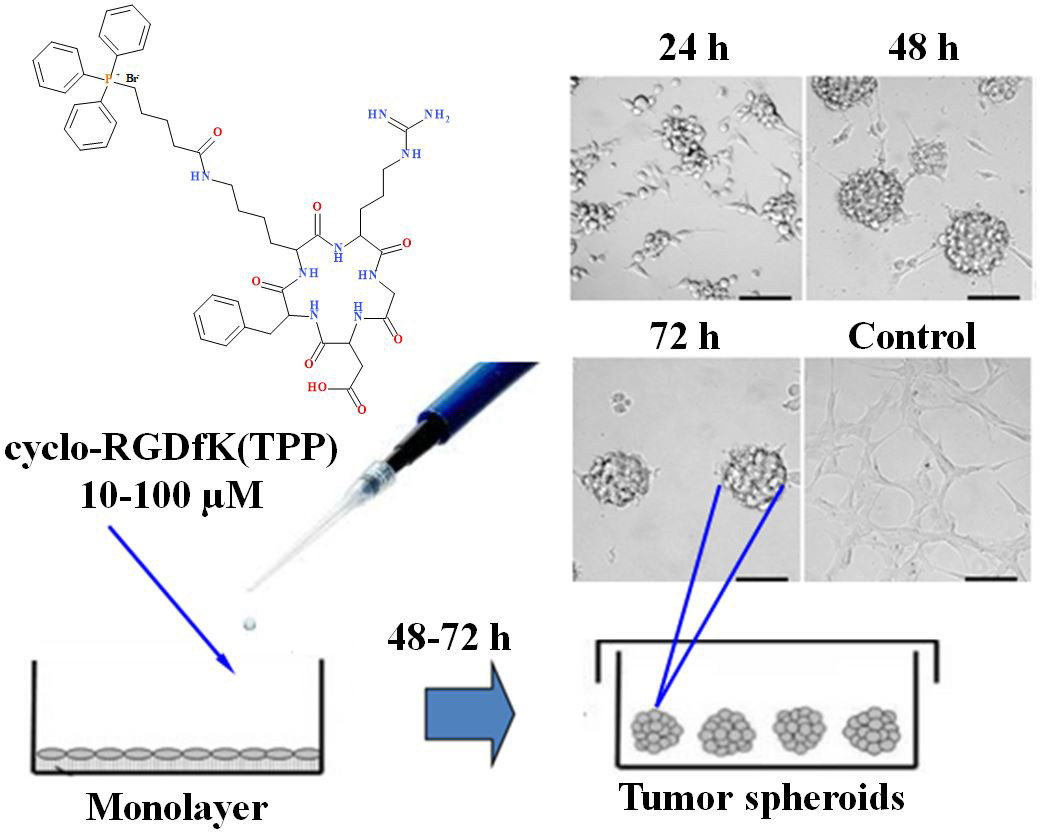 Sutherland et al. were the first to propose multicellular tumor spheroids as 3D models of small solid tumors. Multicellular tumor spheroids (MTS) are useful 3D in vitro models that mimic the in vivo tumor environment. Such 3D modeling systems are valuable intermediates between in vitro and in vivo studies. There are several methods for the preparation of MTS, most of which involve multiple steps, time-intensive preparation, the need for specialized equipment, or a combination thereof.

A novel one-step, reproducible method of spheroid formation is based on the use of a cyclic RGD-peptide equipped with a triphenylphosphonium group, abbreviated cyclo[RGDfK(TPP)]. Addition of this peptide to a monolayer cell culture leads to the self-assembly into loose cell aggregates through interaction with alpha-5 beta-1 integrins. This interaction has been proposed to trigger the expression of E-Cadherin, a cell adhesion protein located in the plasma membrane, which most likely takes place during a latent period. Approximately 72 h after addition of the cyclic RGD-peptide, the loose cell aggregates compact into tight multicellular spheroids. This transformation has been suggested to be caused by the presence of a sufficient number of Cadherin molecules on the cell surfaces.

Addition of cyclo-[RGDfK(TPP)] (10-100 µM) to a monolayer cell culture results in the formation of loose cell aggregates first, followed by a latent period and then compaction into multicellular spheroids.

The utility of this method was demonstrated with several cell lines including cancer, normal and stem cells. The following cell lines are known to form MTS upon addition of cyclo-[RGDfK(TPP)]:

It was posited that cyclo[RGDfK(TPP)] mimics the micro tumor environment (MTE) and the interactions of tumor cells with the extracellular matrix (ECM). In particular, cyclo[RGDfK(TPP)] was proposed to mimic the RGD-motif of fibronectin which is recognized by corresponding binding motifs in integrins. Therefore, cyclo[RGDfK(TPP)]-induced spheroids are valuable tools for the design of 3D in vitro tumor models, as well as for tissue regeneration experiments. 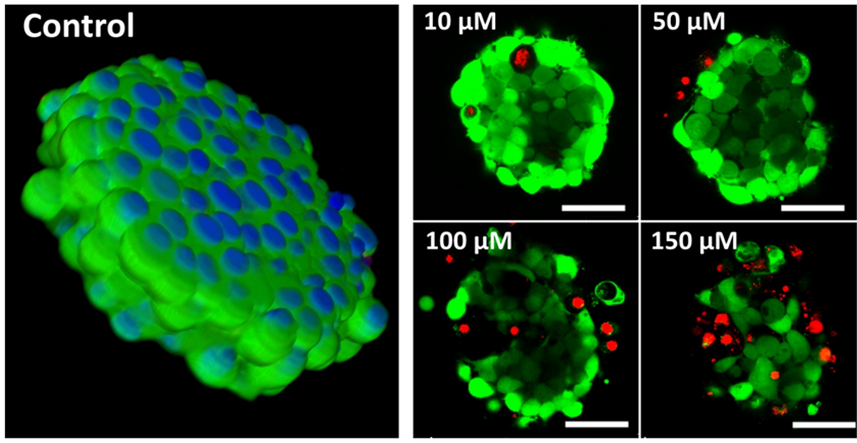 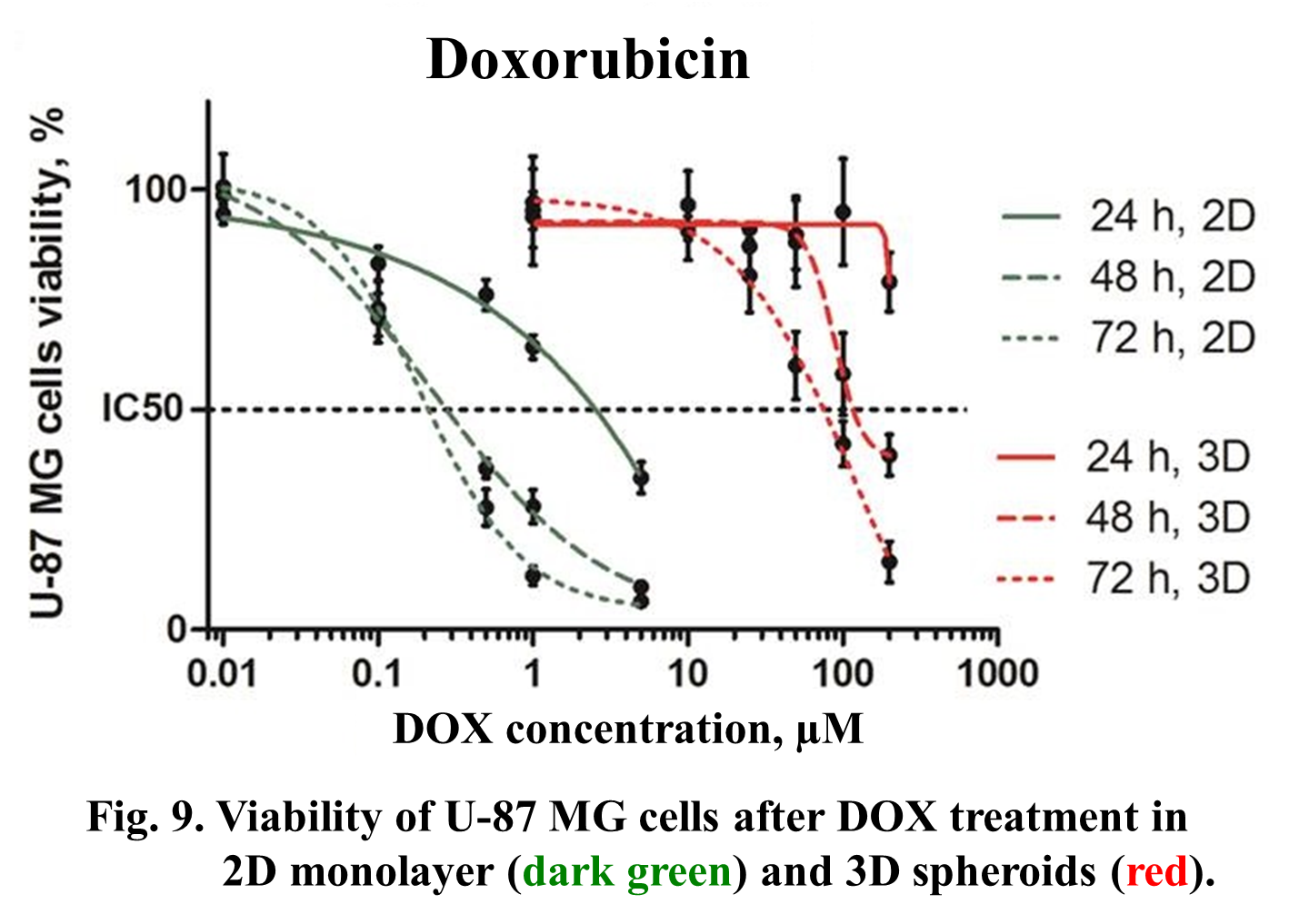 The peptide cyclo[RGDfK(TPP)] for 3D spheroid formation is produced by Cytomed (St. Petersburg, Russia) in cooperation with Iris Biotech.