Advances in the field of peptide synthesis regarding coupling agents, the availability of pre-coupled building blocks, and optimized resins enable the suppression of racemization and lead to increased product yields.

Although peptide chemistry is constantly developing, the process of aspartimide formation during peptide synthesis remains a serious challenge limiting the accessibility of certain peptide sequences. Aspartimides are formed upon ring-closure between the nitrogen of the alpha-carboxyl amide bond and the ß-carboxyl sidechain and release of the carboxyl protecting group. As this side reaction is promoted by strong bases such as piperidine which is commonly used for Fmoc removal, this problem is especially pronounced during Fmoc SPPS.

The formed aspartimides undergo rapid epimerization followed by ring opening either by hydrolysis or by virtue of base, thus leading to the formation of up to nine potential by-products. Consequently, aspartimide formation leads to low products yields in addition to time- and cost-intensive purification. As some of those by-products are even co-eluting on HPLC due to identical retention times compared to the desired product, they may be virtually impossible to remove rendering certain peptide sequences inaccessible. 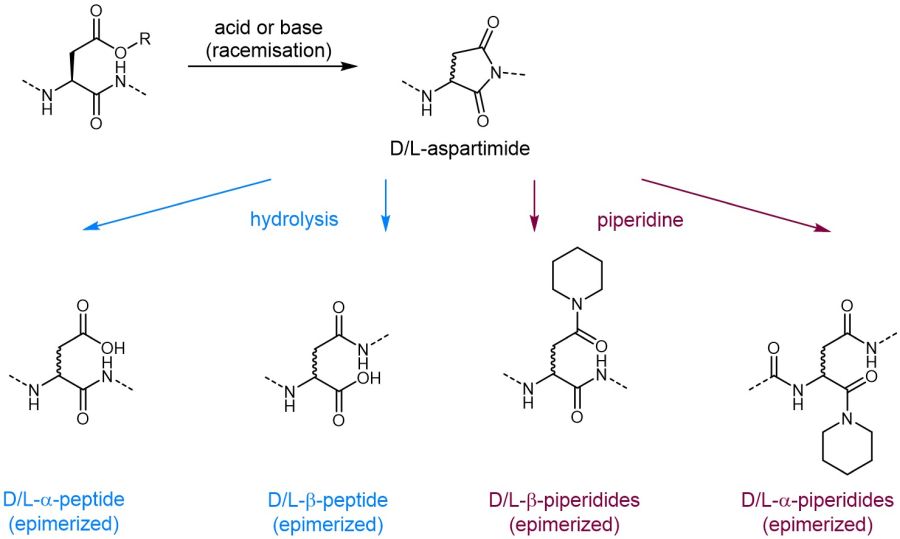 Aspartimide formation and possible side products.

Analogues of the tert-butyl group in which the methyl group is substituted for longer alkyl chains help to shield the aspartyl beta-carboxyl group and thereby reduce the formation of aspartimide-derived by-products. Our bulky side-chain protecting groups provide considerably more protection against the formation of aspartimide-related by-products than the commonly used OtBu group.