PotM: His Tags for the Chemical Modification of Peptides

PotM: His Tags for the Chemical Modification of Peptides

Jensen et al. developed two methods that use poly-His sequences to direct the highly selective acylation of proteins, either at the N-terminus or at a specific Lys residue. Read on for more information.

Tools for the site-specific incorporation of a desired functionality on proteins are highly thought after, be it for the synthesis of chemically modified biopharmaceuticals, the investigation of biological systems, the creation of therapeutic conjugates or other applications in chemical biology and related fields.

Often, the introduction of functional groups on amino acid side-chains in proteins refers to reactions at cysteine (Cys) or lysine (Lys) residues. While Cys occurs rather rare and is often buried within the protein’s three dimensional structure or involved in disulfide linkages, Lys is an abundant residue, frequently found at the protein surface making its side chain amine more accessible. However, reactions that target side chain functional groups, e.g. the primary amine in Lys or thiol in Cys, tend to modify all occurrences of this residue, thus leading to the formation of a heterogeneous mixture of modified proteins with very low selectivities.

Besides side-chain modification, a number of methods utilizes the special properties of the N-terminal N-alpha amine. Typically, the N-terminus of a protein is surface-exposed and well accessible for chemical modification without interfering normal protein function and folding. In addition, theoretically, the N-terminal alpha-amine can be targeted for selective, pH-controlled acylation or alkylation due to its lower pKa value (~7.6-8.0) compared to other Lys side-chain epsilon-amines (pKa 10.5±1.1). However, the selectivity is often challenged by a high number of competing epsilon-amines on different Lys residues and a change in pKa due to the local environment.

A frequently used tag for protein modification is the so-called His tag. His tags, or polyhistidine tags, comprise a consecutive series of six to ten histidine residues. His tags are widely used for protein purification by immobilized-metal ion affinity chromatography, allowing to extract a protein of interest from thousands of other proteins present in a cell lysate. However, as an iadvertent side-reaction, it is reported that His-tagged proteins can undergo N-terminal acylation with gluconolactone (GDL). The discovery of this reaction by Geoghegan and coworkers triggered the inspiration for the development of His tag-based peptide segments for selective acylations. Thus, Jensen et al. developed two methods that use poly-His sequences to direct the highly selective acylation of proteins, either at the N-terminus or at a specific Lys residue. 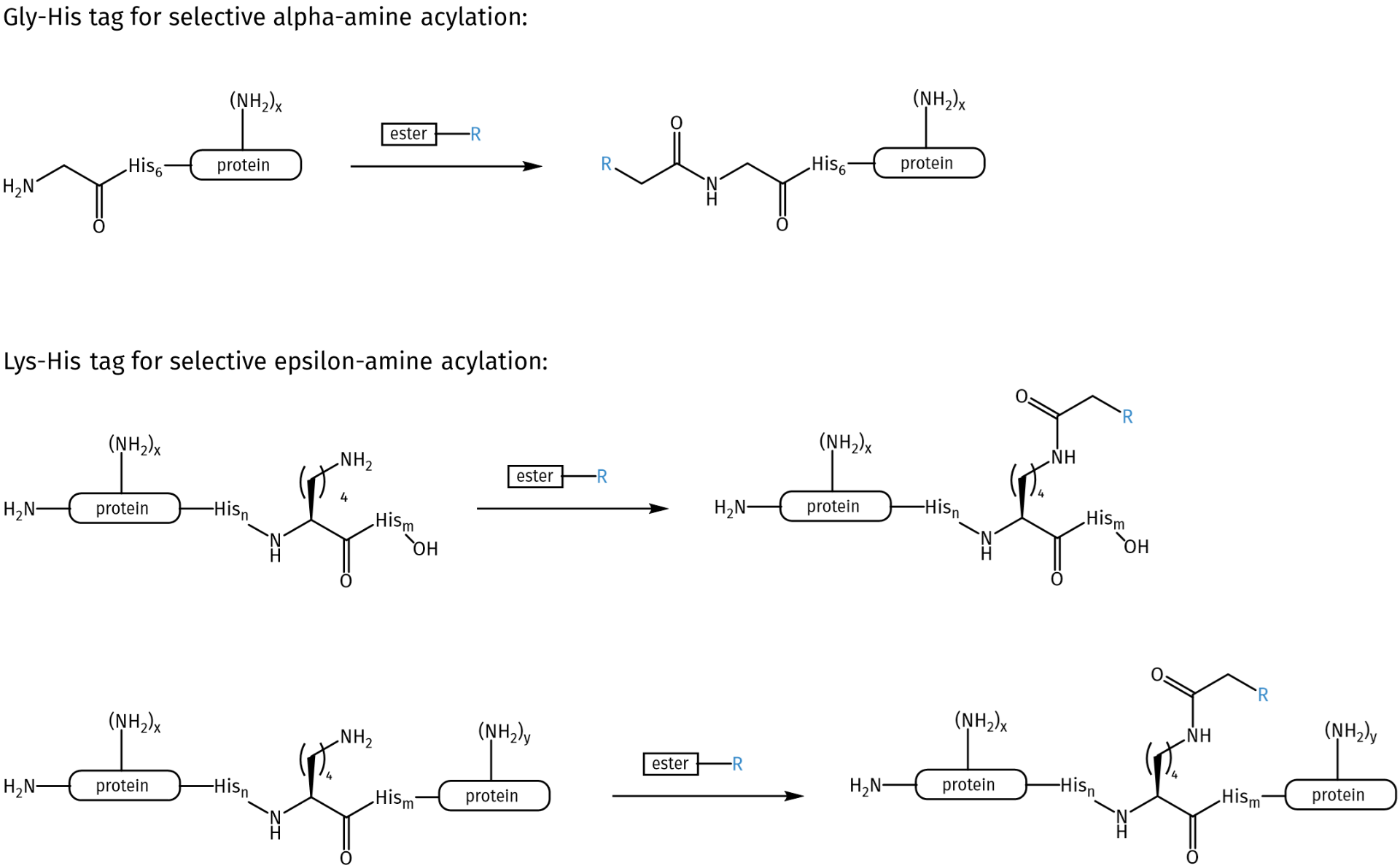 The highly selective and efficient N-terminal acylation of proteins is based on a Gly-His6 segment (Gly-His tag) complemented by the use of 4-methoxy phenyl esters as finely tuned acylating agents, resulting in stable conjugates. Other acylating agents, e.g. lactons, thioesters, N-hydroxysuccinimide ester were also tested but gave only limited N-terminal acylation or low selectivity.

For the acylation of Lys, Jensen et al. developed the peptide sequence Hisn-Lys-Hism (Lys-His tag) that directs the acylation of the designated Lys N-epsilon amine under mild conditions and with high selectivity over native Lys residues.

Both methods provide highly selective acylation, yield stable conjugates, and do not require the use of metal ions. In detail, referring to literature, yields for the protein modification with Gly-His are typically 60–80 % mono-acylation with 1–5 % over-acylation, while for Lys-His it is typically 50–70 % monoacylation with 1–8 % over-acylation. The Gly-His tag as well as the Lys-His tag maintain the capacity for immobilized metal ion affinity chromatography and have been shown robust for the attachment of azides, fluorophores, and biotin to different proteins, including antibodies.