Peptide purification after SPPS usually requires time- and solvent-consuming HPLC, which is often limited by co-eluting side-products. Belyntic’s catch-and-release PEC-Linker chemoselectively catches the desired product from your crude to reach a new dimension of purity.

Despite a rather straightforward synthesis, the most time-consuming part remains the purification for peptide manufacturing. This downstream step is complicated by poor solubilities of peptides and incomplete couplings that accumulate in a series of truncated sequences. Therefore, usually, chromatographic methods such as flash chromatography, ion-exchange chromatography, or high-performance liquid chromatography (HPLC) are used, which consume large amounts of organic solvents. Furthermore, peptide purity is often critically affected by co-eluting side products that are hard to remove and thus requires the laborious optimization of purification parameters.

Belyntic’s PEC technology provides an orthogonal method for fast and parallel peptide purification to increase your throughput, ecological efficiency, and productivity. The purification process is seamlessly integrated as an extension of the SPPS and includes the following working steps, as shown in the figure below:

The chemical structure of the PEC-Linker allows you to purify any peptide sequence through a traceless safety-release upon reductive cleavage.

Benefits of this non-chromatographic, instrument-free purification are drastic savings in time and solvent, flexibility in number and scale, and chemo-selective isolation.

The usefulness of the PEC Catch & Release technology was successfully demonstrated in several case studies, among them the two examples shown below.

Example 1: The neoantigen-based vaccination against cancer requires a set of ~20-30 peptides per patient with an average length of about 15-20 aa. The PEC-purification of the crude peptides drastically increases the purity of the individualized peptide library within short times.

Example 2: The purification of the Histone H3 (1-15) peptide sequence H-ARTKQTARKSTGGKA-OH using either PEC, a single RP-HPLC run, or two RP-HPLC runs reveals a drastic reduction of the solvent waste by using the PEC purification technology. 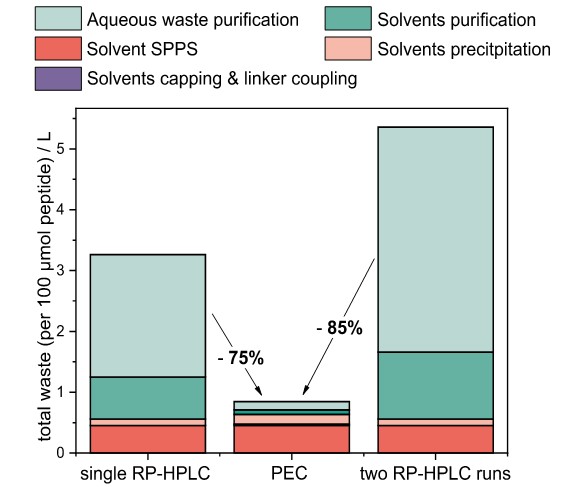 ➔ Visit our Webshop to discover the product range of research kits

➔ Are you interested in High-throughput Kits or larger scale peptide purification by PEC? Send us your inquiry!