An efficient, versatile linker developed for the synthesis of C-terminal primary/secondary amides and hydrazides as well as peptide alcohols, which is compatible with SPPS and suppresses side reactions.

Iris Bioech offers the Ramage-Linker (RL-1029) in high quality available in bulk quantities. The basis for the Ramage linker is a dibenzocyclohepta-1,3-dienyl system with an additional oxygen substituent which serves on one hand for further stabilization, and on the other hand as site of appendage to the polystyrene resin. For your convenience, we also offer Ramage-linker polystyrene resins in different mesh sizes (BR-5204, BR-2015).

After Fmoc removal, standard SPPS can be carried out with conventional Fmoc/tBu protocols. Peptide cleavage from the resin can be achieved by treatment with only 3% TFA in DCM to yield the fully protected peptide, or with 50% TFA in DCM or 95% aqueous TFA to remove any side chain protecting groups.

Besides C-terminal amides, the Ramage linker can also be used for the synthesis of C-terminal peptide alcohols. Their diverse biological activities and clinical importance are described in various publications. One prominent example is Octreotide, a metabolically stable analog of somatostatin which contains threoninol at the C-terminus. Starting from the Ramage linker or resin, the deprotected primary amine can be converted to a hydroxy moiety and further to the corresponding chloride, which can then be loaded with Fmoc-amino alcohols. Analogous to the preparation of peptide amides, the synthesized sequence can be detached from the linker and fully deprotected by addition of 95% aqueous TFA, while treatment with 20% hexafluoroisopropanol in dichloromethane is reported to render a fully protected peptide alcohol that can be further modified at the C-terminus. 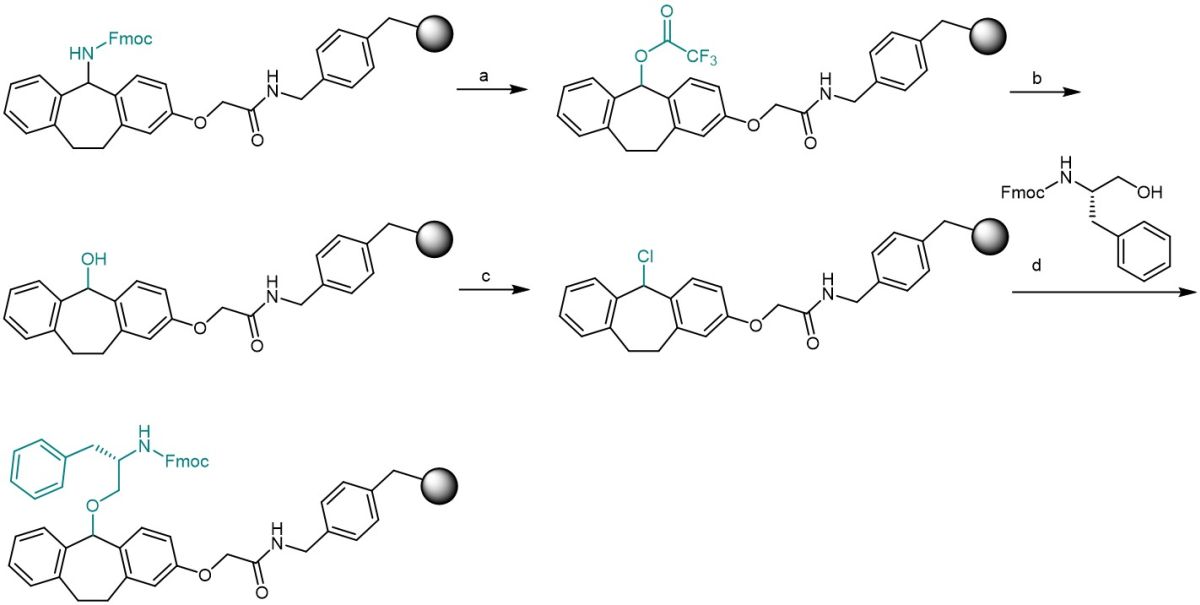