Iris Biotech presents its selection of Val-Cit-based linkers, a dipeptide motif frequently utilized for the development of ADCs with increased serum stability and high cleavage efficiency.

The conjugation of highly potent small drug molecules to target specific biomolecules, like antibodies, is a sophisticated approach, particularly in the field of cancer therapy. Such a synergistic combination allows to circumvent the disadvantages of antibodies, like low potency, as well as the drawbacks of small drug molecules, like low specificity and unwanted side effects.

Linkers, which are implemented to combine both moieties, need to provide sufficient stability during systemic circulation while providing rapid and efficient release of the cytotoxic drug in its active state upon reaching its target.

To fully suit the application’s needs, various linker systems have emerged, including permanent linkers as well as chemically or enzymatically cleavable ones. The latter ones include peptide linkers, which are distinguished by their increased serum stability as well as rapid enzymatic release upon internalization into the target cell. First generation peptide linkers like Gly-Phe-Leu-Gly and Ala-Leu-Ala-Leu were prone to aggregation of the conjugates as well as slow drug release. These limitations are tackled by utilizing dipeptides, such as the Valine-Citrulline motif.

The Val-Cit fragment serves as substrate for cathepsin, a lysosomal protease, which is typically not found extracellularly except under pathological conditions, e.g. in metastatic tumors. Cleavage of the amide bond by hydrolysis is followed by a 1,6-elimination of the para amino benzyl alcohol (PABC) spacer, fragmentation, and traceless release of the drug molecule inside the cell.

Valyl-citrullyl dipeptide fragment as recognition motif of cathepsin undergoes cleavage by hydrolysis leading to a 1,6-elimination with fragmentation and traceless release of the drug molecule.

This prominent motif was utilized by Seattle Genetics for the development of the ADC Adcetris®, which is used for the treatment of Hodgkin’s lymphoma and systemic anaplastic large cell lymphoma.

➔ Those derivatives are also available based on the Val-Ala motif

Our knowledge and products for linker technologies and ADC design are summarized in our brochure Linkerology, which is available for download free of charge on our Webpage.

To facilitate the development of new ADCs suitable for your desired application, we offer a broad range of protected (Fmoc, Boc) as well as prefunctionalized peptide linkers, e.g. derivatives with a maleimide moiety or bearing an alkyne or azide moiety, which can easily be used for further conjugation via Click reaction. 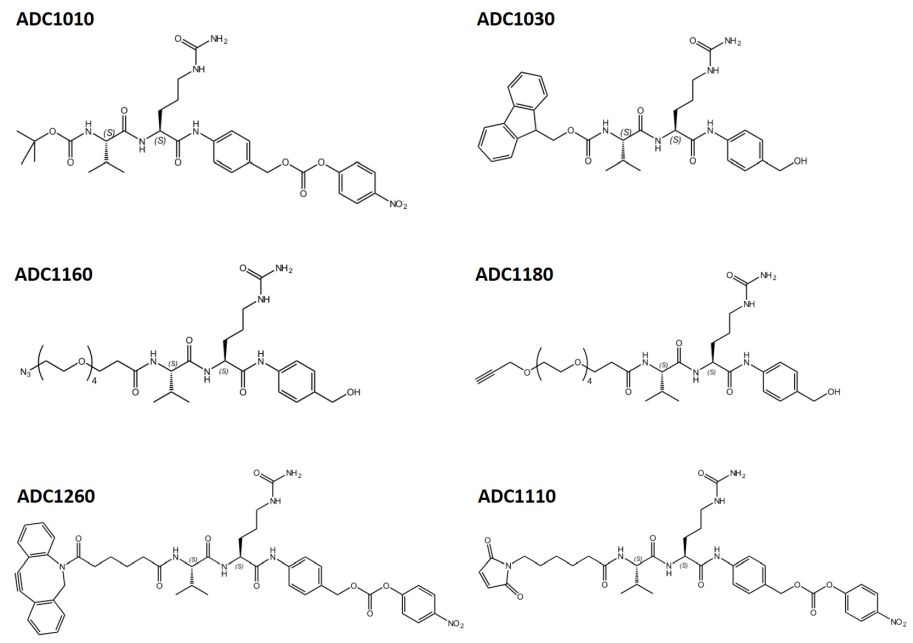 ➔ You could not find your derivative of choice? Please get in contact for a custom synthesis