The Dawson Linker and its variants provide access to C-terminal peptide thioesters which are crucial components of Native Chemical Ligation reactions. Read on to discover all derivatives available at Iris Biotech!

Native Chemical Ligation (NCL) is a powerful protocol that is frequently used in the synthesis of complex peptide sequences. The NCL technique also grants access to small fully synthetic or large semi-synthetic proteins. One of the two peptide fragments required for NCL has to be converted to a C-terminal thioester. This step necessitates either special synthetic conditions for SPPS that frequently result in racemization and/or low yields, or additional modifications in solution phase that lead to more tedious isolation and purification steps. 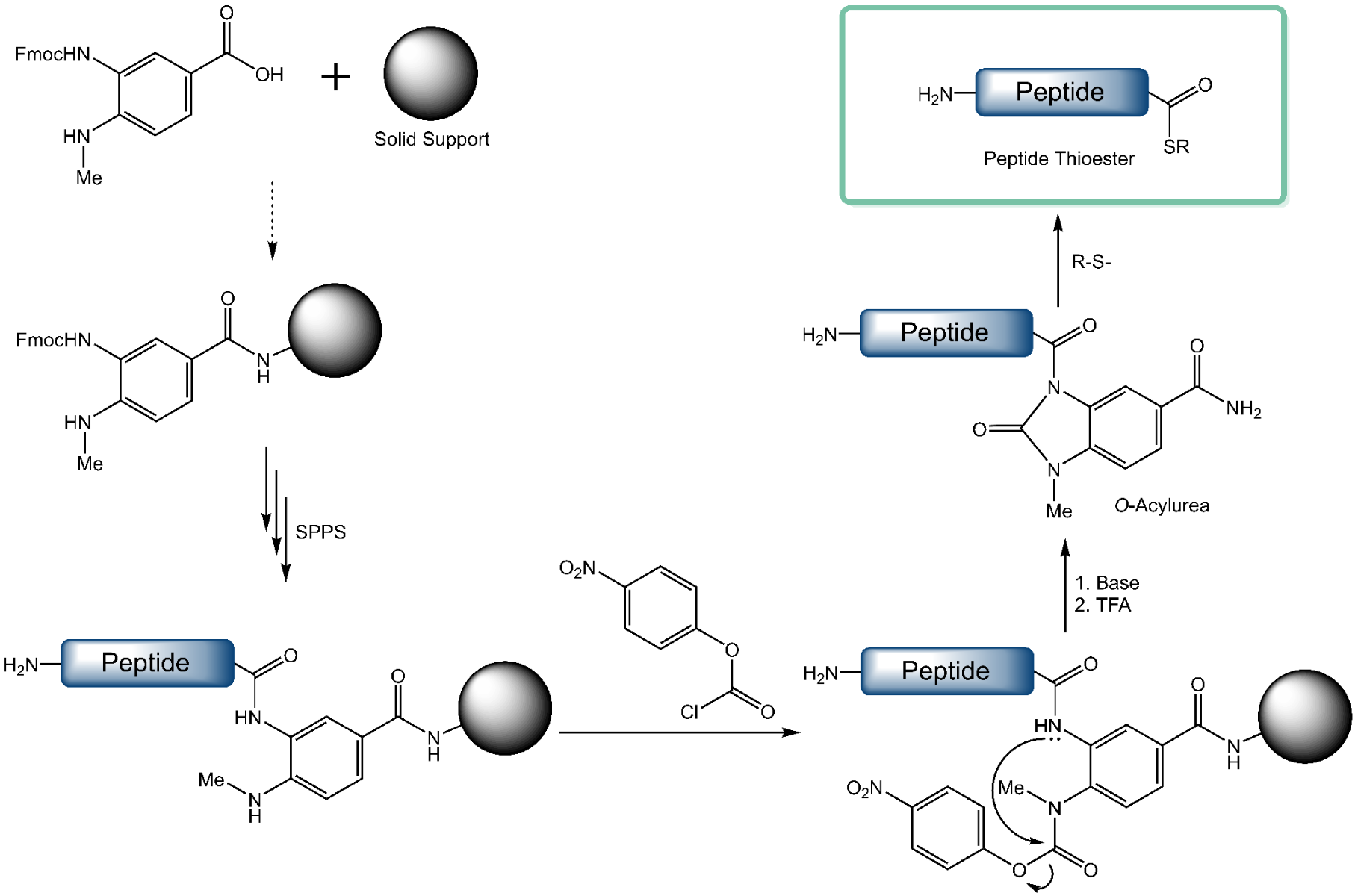 A practical and synthetically more accessible thioester surrogate in the form of an O-acylurea peptide can be prepared by utilizing the innovative Dawson-Linker (Fmoc-MeDbz-OH). After successful chain assembly on resin, the linker is activated by reaction of its secondary amine with para-nitrophenyl chloroformate. The N-methyl group of the 4-amino functionality of Fmoc-MeDbz-OH hereby suppresses potential side reactions occurring at this position. This step is followed by a base-catalyzed rearrangement and cyclization to N-acyl-N’-methyl-benzimidazolinone (MeNbz). Cleavage from the resin with trifluoroacetic acid affords the O‑acylurea peptide which may then either be converted to a C-terminal thioester by reaction with an aryl thiol or may be used directly for Native Chemical Ligation.

Iris Biotech offers the classical Dawson linker (FAA3165) as well as various of its derivatives (see “Related Products” below). As previously mentioned, the main difficulty during the formation of the O-acylurea peptides is the overacylation of the deactivated ortho-amino group of the Dbz linker. Thus, its protection is required to avoid the accumulation of branched and acetylated side products and to better control chain extension.

The methylation of the Fmoc-Dbz amine in position 4 of MeDbz (FAA3166) renders this position less reactive and suppresses the formation of side products on the para-amino moiety.

Another Dawson linker derivative (FAA3168) is based on the allyloxycarbonyl (Alloc) protection of the Dbz amine in position 4. After successful synthesis, the Alloc group can quantitatively be removed under mild conditions, followed by thioester formation.

The derivative FAA3167 makes use of the tert-butyloxycarbonyl (Boc) group as an efficient and acid-labile protecting group for the deactivated Dbz amine. Unlike Alloc, the Boc group is removed by TFA during global deprotection of the peptide and cleavage from the resin without requiring an additional step.

Finally, the 4-amino-3-nitrobenzoic acid linker (FAA3169) was developed particularly for microwave-assisted peptide synthesis. After successful chain assembly, Dbz(NO2) can easily be converted into the Dbz linker by on-resin reduction with SnCl2. Even though epimerization of the C-terminal amino acid limits the use of the nitro derivative to the synthesis of peptide-Gly-thioesters, it suppresses the formation of side-products which are otherwise observed during microwave-assisted synthesis when using Dbz or Dbz(Alloc).

➔ Are you using the Fmoc-MeDbz-OH Dawson Linker in large scale on a regular basis? A robust and economic process allows us to promptly provide you with kg quantities at competitive prices and in high quality.
➔ Interested in more information on Native Chemical Ligation? ➔ Please feel free to download our new brochure on Ligation Technologies.