The thiosuccinimide linkage is a prominent connective motif resulting from the reaction of a thiol and an alkyl maleimide. Read on to learn more about its applications and potential improvements.

Conjugating highly potent small molecules to vastly target specific biomolecules, like antibodies, has become a modern and sophisticated approach, particularly in the field of cancer therapy. The interest in such constructs continues to grow, bolstered by the success of Adcetris (brentuximab vedotin) for the treatment of large cell lymphoma and relapsed Hodgkin lymphoma and Kadcyla (trastuzumab emtansine) for HER2-positive metastatic breast cancers. Both drugs share a thiosuccinimide linkage as connective motif, which results from the reaction of a thiol (e.g. from a Cysteine side chain) and an alkyl maleimide.

Brentuximab vedotin (Adcetris) with its thiosuccinimide linkage highlighted in red.

The stability of the connection between antibody and payload is crucial for the safety and efficacy of the designed ADC. Although the thiosuccinimide linkage is widely used, it is reversible since it can undergo a retro-Michael reaction. Premature release of the drug from the antibody entails reduced efficacy and specificity due to decreased drug loading and might increase side effects and toxicity, lowering overall safety. In literature, three competing reactions are described: (I) equilibrium of the succinimide-thioether with its free maleimide (reversible), (II) thiol exchange reaction of the free maleimide with an exogenous thiol nucleophile (reversible) and (III) hydrolysis of the thiosuccinimide, which results in a ring-open structure (irreversible).

Apparently, the change in the linker of the drug conjugate upon hydrolysis of the thiosuccinimide (ring-closed ADC vs. ring-opened ADC) does neither affect selectivity nor potency of the ADC but improves its overall stability.

Thus, efforts are made to purposefully convert the ring-closed maleimide-thiol conjugates towards their opened counterparts. Protocols for selective and mild cleavage are reported and structure analysis revealed that the kinetics of the hydrolysis can be accelerated by the incorporation of electron withdrawing N-substituents and good nucleophiles close to the carbonyl function.

Iris Biotech provides a variety of self-hydrolyzing maleimides. Aside from the well-known Mal-L-Dap(Boc)-OH (MAA1041) and its corresponding DCHA salt (MAA1040), we also offer RL-3430 as an alternative that acts as a longer spacer between conjugation partners. Additionally, Iris Biotech provides Mal-L-Dap(Boc)-OPfp (MAA1080) as an active ester ready for conjugation, as well as the enantiomer Mal-D-Dap(Boc)-OH (MAA1060). 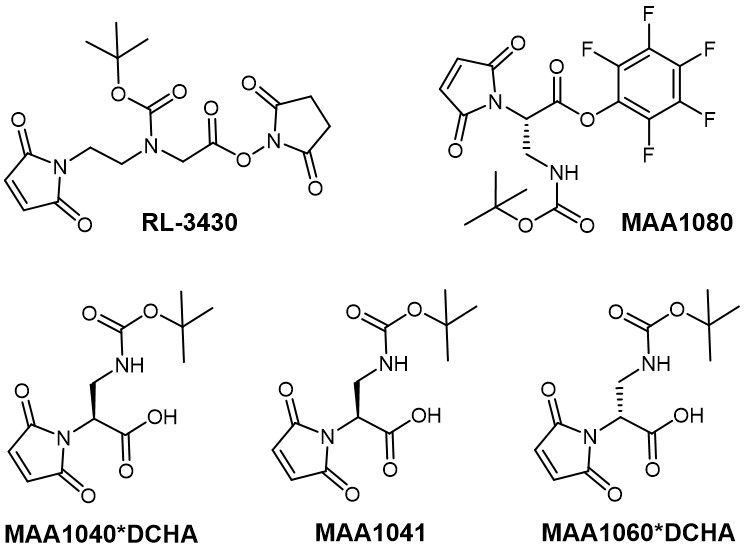